(The ideal room for Mixing) – A “good sounding” recording room basically means a room with controlled and low reflections. For learning the science of how sound waves travel and the behaviour of sound is important for building a good space for mixing you can join any sound engineering institute in India to learn the acoustics of building the ideal room

But when it comes to mixing, is it the same story? This means that if we have a good sounding room for recording, is it good for mixing?

Generally, the answer is yes (and it’s certainly better than a bad-sounding room!), but with a few important caveats. 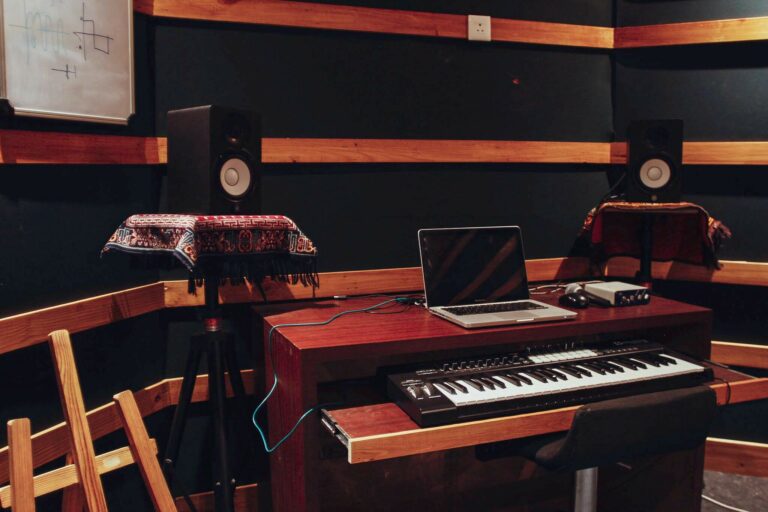 First, let’s get the cat out of the bag: it’s perfectly possible to completely ignore the room when mixing, simply by mixing on headphones.

In fact, many engineers (myself included) prefer to use headphones when mixing under pressure in an unfamiliar environment because it saves time (you don’t have to “learn” the room) and ensures consistent results (you “know” your headphones, so having an idea of how things should sound like).

For example, I know what the bass sounds like on my Beyerdynamic 990 Pro, so I can take any bass line and quickly balance it to match my references without even listening to it.

But let’s assume we’re talking about mixing on monitors.

When it comes to room sound, mixing differs from recording in several ways. (The ideal room for Mixing)

First, unlike a microphone, the mixing position in the room is relatively fixed (unless you want to move the table every session!). The “mic” is really your ears… so it matters more how the room sounds in the mixing seat than the room in general.

This means that design optimization and room modification will be focused on the area where your head lies.

Since we can move around a bit, the relevant area is around, say, a 1 or 1.5 meter diameter sphere, centered on the midline between the monitors. To give you a little wiggle room.

As few reflections as possible

Second: when recording, small residual reflections (especially high frequencies) can be beneficial because they add a spatial feel while the waveform (ie the essence of the sound) remains largely unchanged.

A typical “room mic” for drums, for example, can do wonders for bonding a multi-mic drum kit (provided the room is good sounding, of course).

Not so in the mixing seat though. We really want to have as few reflections there as possible. Except none, if it’s attainable (which it generally isn’t).

Well, what’s the point of having these uber-detailed (and very expensive) low-crossover 3-way monitors if the tiny high-frequency details you want to hear are broken up by slightly less powerful, slightly delayed high-frequency reflections? ?

Yes – the correct answer is “none”.

To get value for money from your monitors, you want to have a completely reflection-free headroom, so the only sound waves that reach your air are those produced by your monitors, not reflected.

It’s harder than it sounds. Why?

Because the table is not your friend.

Your computer screens or nothing sticks out in front of the speakers.

The thing is, every flat surface in your room reflects sound, not just the walls.

And guess what: the highly reflective surface – reflecting slightly delayed waves right at your ears – is the mixer right in front of you! Or of course any computer screen in front of the speakers.

Therefore, when placing nearby monitors, do not place them directly on the table. Use column stands or raise them (this is why many desks have baffles) and when placing them on top of the baffle, try to make the speakers “come out a bit”. Also, make sure your computer screens are further away from the speaker grills.

You can also point the monitors slightly upwards (to create a larger angle between the underside of the beam cone and the table) – there are several table stands that are shaped just for you.

If you can, cover your desk with some absorbent material or at least scattering shapes that help dissipate at least the high-frequency reflections (yay! finally a solid excuse for all those chip bags and coke cans sitting on your desk!).

It’s also important to make sure your monitors are placed firmly and don’t vibrate or, even worse, cause vibrations on your desk. The vibrations will of course move the air in line with your direct sound and generate a new energy wave that will have a shape at least partially similar to the direct sound… This wave will reach your ears with a slight delay and cause filtering. This is why monitor stands must be heavy and have some damping properties (like thick rubber pads under the speakers).

Placing monitors on walls can help (although this depends on monitor design and their EQ controls) and even more so placing them on walls – which is exactly what real studios often end up doing, using larger midfield monitors that can be held further away from the mixing desk.

Another good way to keep your mixer sounding good is to keep the mix volume down (especially for the bass output of the desk monitors).

Low as in “I can talk to someone about it without trying”. So low.

That booming bass you hear when you start up means there’s a lot of bass energy released in the room that bounces back onto the table or floor, comb filtering the sound that reaches your ears and giving you a very distorted idea of what what’s happening.

This is why it’s always a good idea to check the bass on your headphones when you need to hear how the mix is performing at higher playback levels.

By the way: if you use a subwoofer with a high enough crossover, you will have less of this problem, because the low frequency waves will hit the table less if they are generated outside of it. Unfortunately, the subwoofer usually comes with much bigger problems on its own. Higher volume for low-frequency waves equals higher energy levels, which in turn makes the bass much harder to absorb. So a subwoofer and low levels can be good, but most people who buy a subwoofer want to hear it loud, which usually doesn’t end well. Unless your room is very good at preventing low-frequency reflections, you’re better off avoiding a subwoofer altogether.

Small placement and low levels will help the room – and your mix – sound good!
(The ideal room for Mixing) – learn acoustics and building your own space at Gray Spark Audio Engineering Academy in India