7 Stereo Mic Techniques You Should Try

Engineers have been looking for various ways to record a source with better imaging and without compromising on the quality.  With more than one mic there will always be phasing issues but it notice it and get it fixed is the right way. Stereo miking techniques can use 2 and more mics. We have shortlisted 7 Stereo Mic Techniques that you should try. I hope these methods help to fuel your creativity.

In an X-Y pair, two identical microphones can be mounted together in one place. Both the position of the microphone head and the angle between the microphones are important here. There are several different X-Y pairings, the first of which is simultaneous pairing.

Matched pairs provide excellent position accuracy. The sound arrives from the side at the same time, making it easy to locate each player on the stage. The downside is that it’s not that wide. This can cause the recorded sound to become dry or muffled, depending on the sound of the room.

Pro Tip: You can explore many variations on the standard XY stereo mic technique by making the angle of the mics greater than 90 degrees. This increases the stereo width and decreases the strength of the center. 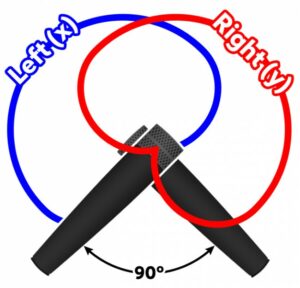 The A/B stereo recording technique is also known as “Spaced Pair”. It involves two microphones positioned anywhere from 3 to 10 feet apart, meant to capture the same sound source. The distance between them will create time-of-arrival (phase) and level (amplitude) differences in the input they receive. These will be more evident as we increase proximity to the sound source.

Level and time-of-arrival differences can be used to recreate location cues our ears receive and brain use to locate sound sources across the horizontal spectrum. For example, at a distance of 60 cm from each other, microphones can capture a source with a time difference of 1.5 to 1.7 milliseconds. This is usually enough to match the location of a sound source to that of one of our stereo system’s speakers. For this, we need to pan the mic tracks hard left and right, respectively. When not panned like this, the same time or phase differences will produce phasing in the output, to varying degrees. Both signals mixed to mono produce the most extreme phasing effect.

Depending on the space, this may not be possible. To help facilitate stereo separation and reduce phase problems, a pair of microphones may be isolated with an absorbent baffle. Commonly known as a Jecklin disk or the modified Schneider disk, when properly applied, a baffled pair may be much closer together than a regular A-B stereo pair. The stereo separation you’ll experience with a baffled A-B stereo pair is even more pronounced if you use omnidirectional mics.

Pro Tip: Any time you have microphones covering the same sound source from different distances, you’re likely to run into some phase problems, as the offset in distance causes the sound to reach the microphones at different times. When in doubt, use your ears, reevaluate your mic placement, and make adjustments to get the results you want. 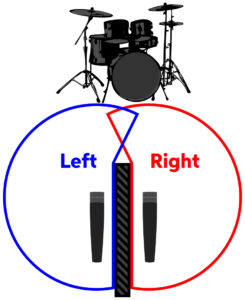 The midside is called “simultaneous” recording technology. This basically means that both microphones are located as close as possible.
How does a stereo image come out on a
, given that the microphones are very close together?

Instead of creating a stereo image through time delay as in XY recording, Mid-Side captures the stereo effect through the volume difference between the microphones used.

Midside technology uses a microphone tuned to a cardioid polarity pattern, but omnidirectional patterns are also available. This microphone is arranged to capture the sound source directly. Therefore, the term “center” is a microphone that literally picks up sound from an audio source in front (not on the sides).

Therefore, the side signal is picked up by a bidirectional microphone arranged in a figure eight. When decoding through a mixer or a special decoding plug-in, the sounds of both microphones are combined to create a stereo image.Pro Tip: It’s a good idea for both microphones to sound identical, or you may have trouble matching levels, so many engineers use the same multi-pattern condensers for both microphones, but that isn’t strictly necessary. 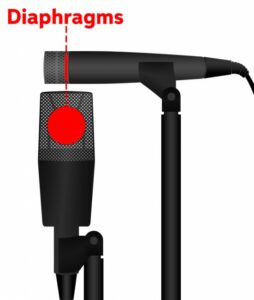 BLUMLEIN TECHNIQUE
In 1931, EMI engineer Alan Blumlein invented stereo recording by demonstrating the natural reproduction of the sound stage at one of London’s Abbey Road Studios.

To date, Blumlein’s recording technology with two figure eight ribbon microphones is the benchmark for realistic reproduction of room performance. The Blumlein method uses two 90 degree angle microphone elements mounted close to each other along a vertical axis.

Pro Tip: Depending on where you position your Blumlein pair, you can pick up more or less of the room ambience. Position it very close to the source and far enough away from the rear wall, and you’ll get pure stereo with virtually no ambience. 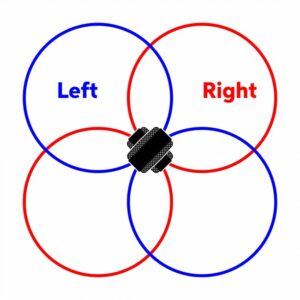 Developed by Decca Records in the 1950s, the Decca Tree technique is one of the most common ways to record stereo and spatial atmosphere in the production of orchestras and symphonies. Although it might seem strange, there is also a cool way to get great stereo tracks using three mics. This method uses a device called a “Decca Tree.” In simplistic terms, a Decca Tree is a t-shaped bar that is suspended above a sound source. The bar serves two purposes: to support the mics and to space them a certain distance. In addition to capturing a solid stereo picture, a Decca Tree also provides opportunity to alter the perceived depth and scope during mix-down.
Pro Tips: Decca Tree is great for making large orchestras and symphonies, but also for arranging drums, choirs and other small ensembles. 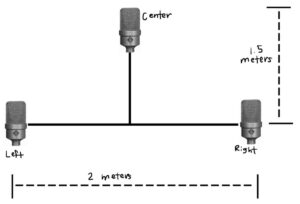 ORTF stands for Office de Radiodiffusion Télévision Française. Radio France invented it as an alternative to X / Y. As a close match pair, the microphone capsules are 17 cm (~ 7 inches) apart and face outward at a 110 ° angle. The capsules must be on the same horizontal plane, but point farther than the matching pair.

ORTF microphone technology simulates the position of the ears above the head. It captures both ITD and IID to create a stereo image with a natural sound and emulates hearing. It balances atmosphere / spatiality with stereo localization while minimizing phase issues. 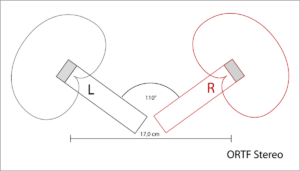 The term binaural recording refers to the fact that the two inputs to the hearing are reproduced correctly. The recording may be made with small microphones placed in the ear canals of a human listener, but normally a copy of a human head is used. The copy has the shape of an average human head, including nose, orbits, pinnae and ear canals, and sometimes the head is even attached to a torso copy. Also the acoustical impedance of the ear drum is sometimes simulated. By accurately copying a human head it is ensured that sound waves reaching the head, undergo the same transmission on their way to the ear canals, as if they were reaching a real listener. A copy of the human head is called an artificial head, a dummy head, a head shnulator or, in German, a Kunstkopf These terms have inspired alternative terms for the binaural recording technique: artificial head recording technique, dummy head technique and Kunstkopftechnik. Also the expression head-related technique is used. The playback is normally done with headphones, since this method ensures that sound picked up in one ear is only reproduced in that ear. Reproduction through loudspeakers would introduce an unwanted crosstalk, since sound from each of the loudspeakers would be heard with both ears. 1 thought on “7 Stereo Mic Techniques You Should Try”