To the casual observer SiX looks like any other compact desktop mixer. Look a little closer and like all SSL consoles, SiX reveals a carefully considered feature set that is driven by an obsessive desire for total flexibility, to encompass every creative eventuality. It may be small but SiX is a classic SSL design. It carries the DNA of 40 years of true expertise in creative studio workflow. Listen to SiX and you will experience the impeccable sonic performance that is the hallmark of every SSL console. It is powerful and intuitive. Inspired and rewarding. So we as an audio engineering course in India have done an in-depth study of why we use this device. 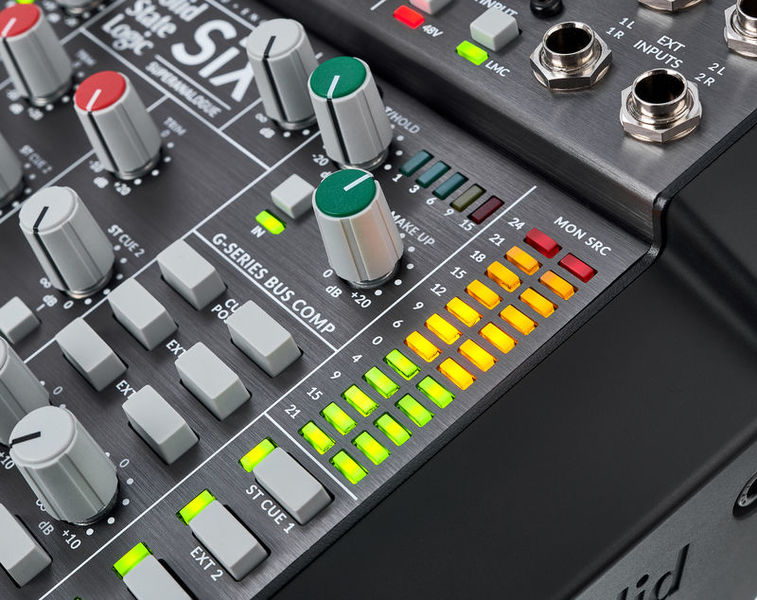 Established in 1969 by Colin Sanders, Solid State Logic initially manufactured FET switching systems for pipe organs. Sanders also owned a recording studio, for which he designed and built a console. More console designs followed, and by 1979, SSL found commercial success with the SL 4000 E Series desk, which would go on to transform the recording industry with its sonic quality and Total Recall automation. Descendants of the 4000 E — the SL 4000 G Series, 6000, 8000, 9000J, and 9000K — would dominate the professional music recording studio industry for two decades. In the mid-1980s, SSL’s 5000 Series film consoles replaced decades-old Quad-Eight boards on many Hollywood re-recording stages, introducing the film and television industry to console automation and a new level of audio fidelity. Today, SSL is still an innovator, carrying on their legacy with a range of gear designed for the modern hybrid studio.

SiX is a condensed professional console for use in the studio, in post-production, on stage, and for podcasting. SiX offers big console sound and an impressive set of utility features in a format that is small enough to stick in a bag a go wherever you need it. SiX is stunning value; it offers two recording channels with SuperAnalogueTM mic pres, two band EQ, an essential one knob version of the classic SSL Channel Compressor, a new two-band Channel EQ, inserts and 100mm faders.

There is a two-knob version of the legendary G-Series Bus Compressor on the main mix bus and the unique Listen Mic Compressor on the Talkback. In mixdown mode it is a very capable twelve channel summing system that offers analogue detail, depth and width to your mixes.

SiX has a G Series Bus Compressor on the main mix bus. This uses the same circuit design as the legendary SSL Bus Compressor from our larger consoles but with a fixed ratio, attack, and release settings and a more modern quad-VCA chip. Easy to get that SSL glue and punch on your master bus.

A new 2-band SSL equalizer design also makes its debut on channels 1 and 2, switchable between shelf and bell curves, with unique center frequencies for each type. There is also a balanced insert point for integration with outboard signal processing, and in the SSL tradition, the insert send is always active, so it can be used as a record send to your DAW. SiX features full-size 100mm faders with tapers that give you maximum control over the most usable gain range for both studio and live sound applications.

Worth the price of admission on its own, the mighty G Series Master Bus Compressor is available across SiX’s main outputs. This is the classic SSL console circuit only with fixed ratio, attack, and release settings as well as an updated, state-of-the-art quad-VCA chip. The streamlined controls make it easy to enhance the sound of your mixes — or whatever it is you’re pushing through the master bus — with that legendary SSL punch and glue.

Channels 3 and 4 are stereo, with trim and pan controls and 100mm faders. SiX gets its moniker from its two mono and two stereo channels, but it also features two stereo EXTernal inputs (with level controls) that can be sent to the mix bus. It all adds up to 12 inputs that can be summed to the main mix bus during mixdown.

SSL has come up with a bigger and better version of SSL SIX called  BIG SIX this is basically the bigger brother of the famous ssl six. With more inputs and better EQ and compression it also can act as an interface.
Some of the features are as follows:

Perhaps the most notable from the list – BiG SiX has “gone big” with a multichannel interface, allowing you exchange audio in and out with your digital audio workstation – but more on that later for a blog dedicated for SSL BIG SIX.