I’ve been blessed to have a Studio that is capable of doing Live Recording Sessions, something that has always been the best way to record a Band.
In this blog, I will discuss some tips and general things to keep a lookout for when doing live sessions.
The key to a good recording can be broken down into these 5 aspects. Let’s go through each one of them and see how we can apply these:

This is pretty obvious and can’t be stressed enough. One wrong choice of microphone and you have a session that will be a disaster (well sonically).
Although this microphone choice completely depends on the sound of the band and the approach you’re using for the recording, some ground rules must be followed to get a good recording. Using a U87 on a vocal mic in a room that also has drums might not be the best idea, you’re going to end up with a good vocal sound with a lot of cymbals in it.
Which let’s be honest, is practically useless. You’d be better off using an SM58 instead, it might not sound as bright and full as the U87 but it will capture the signal well without any bleed.
Think of microphones with directionality to record the sound of the individual instruments. For example, you’re better off to use two KM184s to record overheads than two AKG C414s instead.

Pair the Right Microphone with the right Preamp

A right combination of the microphone with the right preamp can do wonders for a live recording session. At Gray Spark Audio we have over 4 preamp options to choose from UAD 4710d, Neve 511, SSL SiX and Apollo. The combination of the microphone with a preamp can be endless, but you would use a 4710 for a duller sound where you would use the 511 for a brighter sound.
If you’re using an SM58 and use a Neve 511 on Vocals you’d be better off for a better result. Now, this doesn’t mean that you shouldn’t experiment around and see the possible variations before you lock down on your sound. 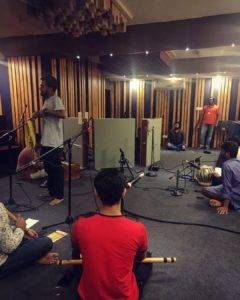 In a live session, the goal is not just to get a good sound for the instrument itself, but it is to get the sound of the instrument and as little bleed of the other instruments as possible. In some cases sometimes bleed could lead to a good sound, but too much snare in a vocal mic leads to problems that can’t be solved. This bleed completely removes the possibility of adding effects etc to that track. Take care to place your artists in the room in such a way that the bleed is minimized. For eg, try to place the vocals as far as possible from the drum kit without losing any quality of sound.
Also make use of separators like Gobos to keep the sound confined in a space, without bleeding into other mics.

Want to setup a meeting at our Facility?
ENQUIRE NOW
No. 4

This is the most overlooked point amongst all the points we are discussing today. Without the right monitoring, you can’t expect the artists to have a good reference of what it is they’re performing in a live recording session. You might have miced everything perfectly but if the artists aren’t hearing things the way they are used to, or the right cues it will be harder for them to give a good performance. Make it as simple as humanly possible to make the artists get in the groove and perform without the monitoring holding them back.

Many times it gets hard for an artist to get into the groove right when they step into the studio for a live recording session, ideally, you should book the studio for the artists to set up and do a few takes and get used to space. Sometimes its harder for the artists to play with headphones on because that’s not the way they hear themselves in the rehearsal space; so give them some time to acclimate and only then start recording.
Keep sufficient time between takes for the artists to analyze what’s going wrong in the performance that they can fix and implement.